Experience vast penguin rookeries and seal colonies on this awe-inspiring voyage to Antarctica, South Georgia, and the Falkland Islands. This 21-day voyage illuminates Ernest Shackleton’s legend and recounts his courageous exploration of Antarctica. You’ll visit historical sites of past explorers, as well as Shackleton’s final resting place – the wildlife-rich island of South Georgia. Antarctica is beyond comprehension and sure to amaze any traveller seeking a true adventure to the world’s most remote wilderness

A long-awaited South Georgia voyage with the MS Expedition! 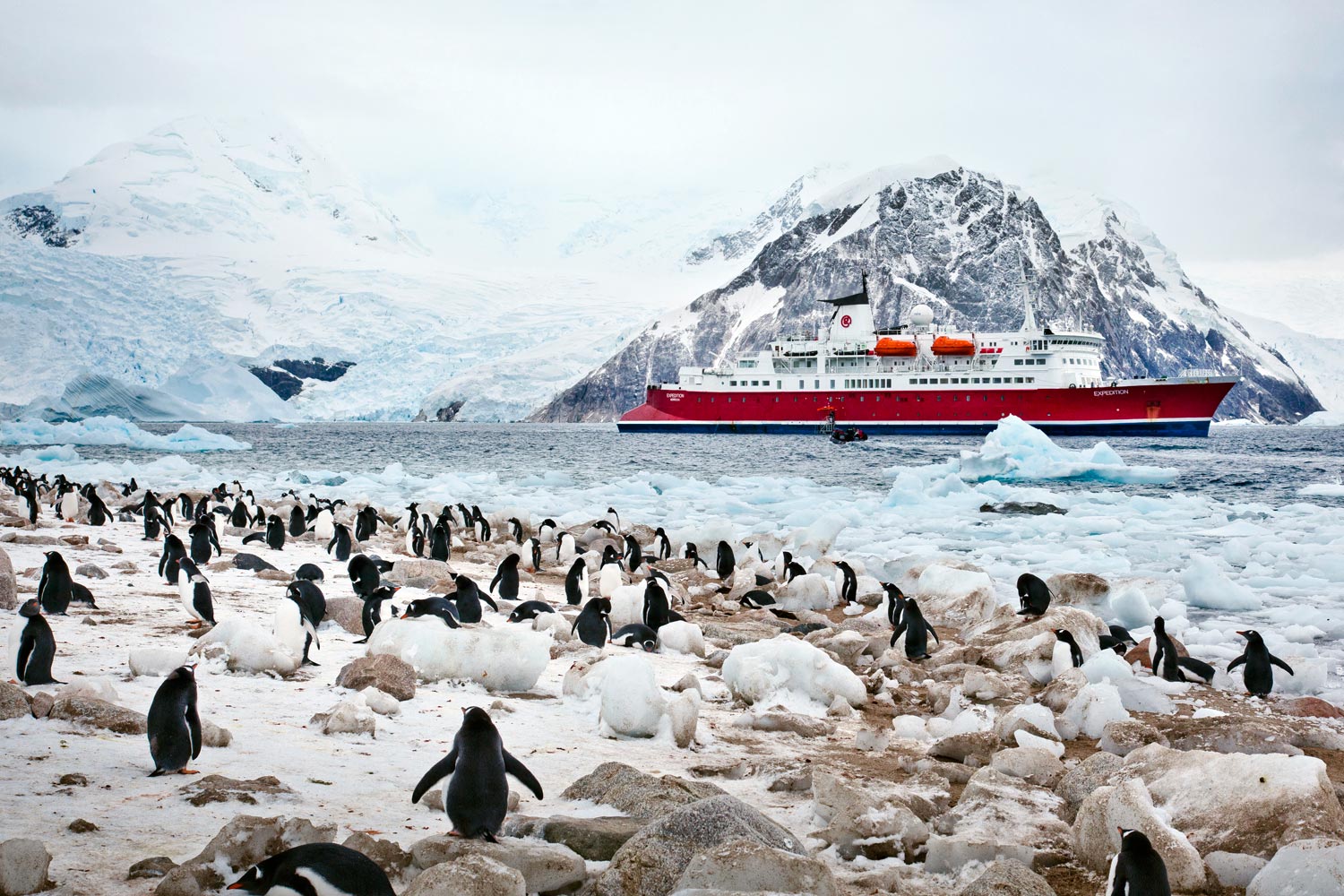 The M/S Expedition provides an intimate small-ship cruising experience. Completely refurbished in 2009, she boasts spacious cabins, each featuring ocean-facing windows or portholes and private en-suite facilities. Large common areas and observation decks provide panoramic views of the distinctive landscapes of some of the world's most remote regions. The Expedition's spacious confines can hold as many as 140 passengers, but our commitment to keeping group sizes small means you'll never have to share it with more than 131 others. Many expedition cruise operators offer you a choice of space, comfort or expertise; the M/S Expedition delivers all three at a price few can top. Included
Excluded Flights to/from Ushuaia are not included in this tour.
Share Bookings and Single Travellers If you are travelling alone and wish to share a cabin you will be matched with another person of the same gender and pay only the share room rate. If you wish to have a sole use cabin, the single supplement is 1.6 X the respective room rate (excluding Category 1). Deposits Reservations require a non-refundable deposit of US$1000 / EUR 1000 / GBP 500 / AUD 1000 per person at the time you receive a booking confirmation from Expeditions Online. A payment link will be sent to you and this may be paid by major credit card. Bookings within 120 days of departure require full payment. Final Payments Balances are due 120 days prior to departure. Balances can be paid by bank transfer - or by credit card subject to a 2% surcharge. Cancellations All requests for cancellation must be received in writing to Expeditions Online. Cancellation 120 days or more before departure: Lifetime Deposit* held by the Shipping Company. Cancellation 119-60 days before departure: 50% of the cost of services booked, Lifetime Deposit* held by the Shipping Company. Cancellation less than 60 days before departure: 100% of cost of services booked, Lifetime Deposit* held by the Shipping Company. If full payment has not yet been received, the full penalty will still apply and any unpaid balance is due immediately. We strongly recommend that you obtain adequate trip cancellation insurance. Booking Terms Please read carefully the General Booking Conditions for Expeditions Online. This voyage is operated by G Adventures Limited of Canada and you additionally travel under their terms and conditions as the operator as well as those of the transport carrier. Details will be forwarded to you at the time of booking. *Lifetime Deposits Should you cancel, the specified deposit amount will be held as a ‘Lifetime Deposit’ with the Shipping Company for the MS Expedition, G Adventures, subject to the full extent of their terms and conditions. This Lifetime Deposit has no expiry and may be used as a deposit on one future tour with MS Expedition. Any specific permit costs above the deposit amount are subject to different terms and conditions as applied by the Company. The Lifetime Deposit has no cash value. Only one Lifetime Deposit may be applied per tour. All Lifetime Deposits must be applied to a new tour that is of equal or greater value than the cancelled tour. A booking may not be cancelled, and have the Lifetime Deposit applied to the same or similar dates of travel or a tour at a price lower than the cancelled tour. The Lifetime Deposit may be transferred or gifted to another Client.