We sail from Ushuaia to the Falkland Islands, home to charming rockhopper penguins and graceful albatrosses. Our next stop is the remote island of South Georgia, a wildlife haven said to have more wildlife per square metre than any other place on the planet. To watch the huge elephant seals fight for their harems and be greeted by hundreds of thousands of breeding king penguins is a truly unbelievable experience. Continue to the most remote and isolated continent - Antarctica. Explore the dramatic landscapes with gigantic icebergs, scenic channels and bustling penguin colonies

We travel in a small groups and strive to have minimal impact on the environment. The Ocean Nova offers a more relaxed atmosphere, greater focus on the destination and more time ashore, compared to a larger vessel. Most vessels that visit Antarctica takes between 120 and 500 passengers, but to visit Antarctica in a group of merely 78 passengers invites to a more exclusive as well as more sustainable experience. The Ocean Nova also has a very low fuel consumption per passenger, one of the lowest in the business. The small numbers maximise flexibility and landing time, unlike other ships over 100 passengers which must break up into groups for every excursion.

WHAT MAKES SOUTH GEORGIA SO SPECIAL?

In the middle of the Southern Ocean lies South Georgia. With nearly 3000-meter-high mountain peaks, impressive glaciers and sandy beaches the island invites its visitors to some of the world’s most magnificent scenery. The wildlife here is truly extraordinary. Everywhere, on the beaches and rocks, in the water and the air, the wildlife is teeming. The sound of hundreds of thousands of king penguins is very powerful! It is an incredible experience to stand among all these curious individuals. Here, we also have chance to meet the huge elephant seals, which can weigh as much as four tons and have over 200 females in one single harem! The new-born seal pups have just started to explore the world and are keen on getting acquainted. Their immense, black eyes win every visitor’s heart! With no land based predators on the island, the wild life here have no fear of humans. This creates a truly magical setting to encounter the animals and watch them go about their day undisturbed.

The perfect small ship expedition on an epic adventure! 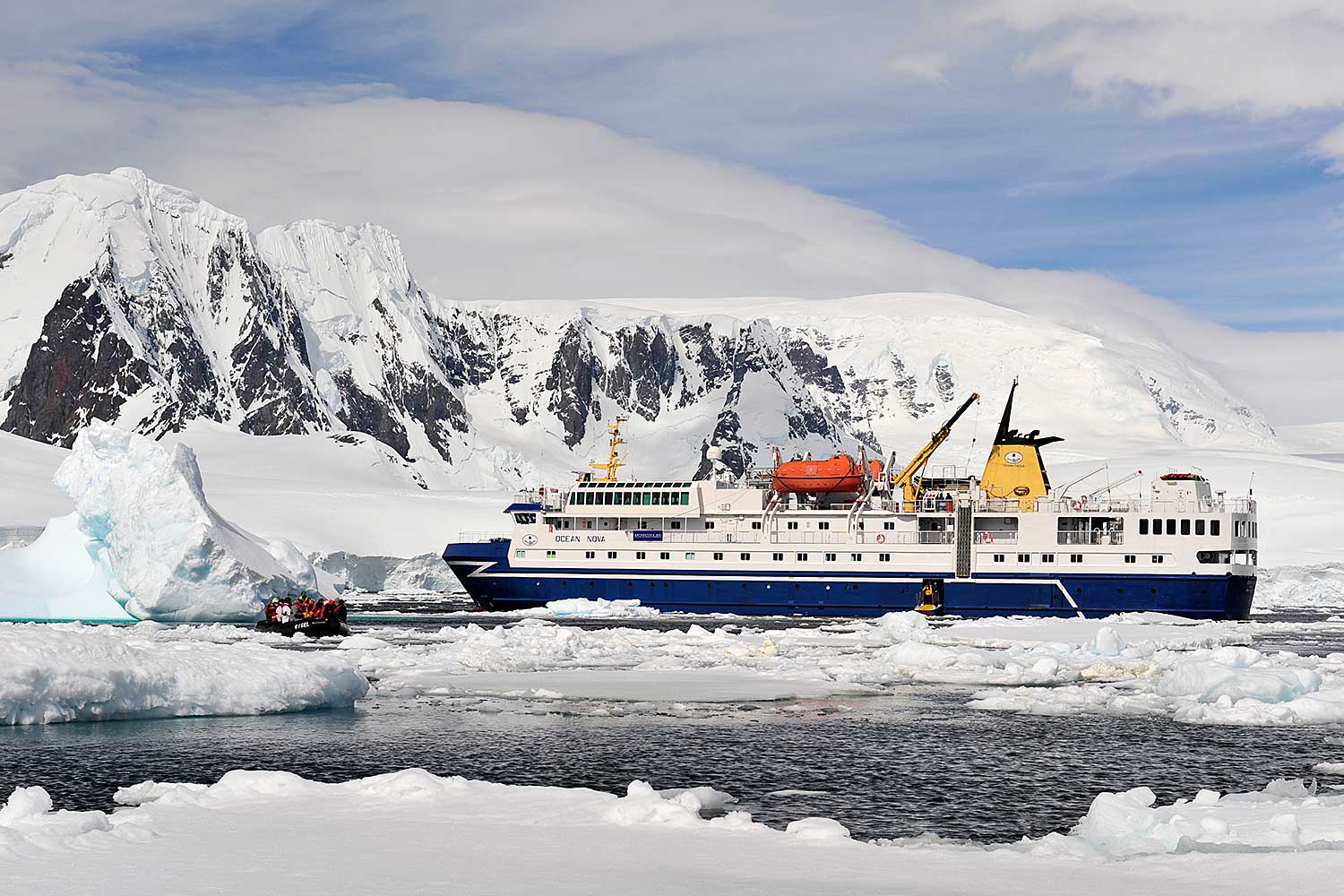 The M/V Ocean Nova is a modern and comfortable vessel - one of the few remaining genuinely small ships in polar travel. She was built in Denmark in 1992 to sail the ice-choked waters of Greenland, and her ice-strengthened hull is ideally suited for expedition travel in the polar regions both Arctic and Antarctic. The M/V Ocean Nova has capacity for just 78 passengers accommodated in comfortable outside cabins, all with private facilities, including dedicated single, twin and triple cabins. In addition to a glass-enclosed observation lounge and presentation room, a spacious dining room, a bar, a library and an infirmary. The ship has Zodiac boats that are well suited for disembarking and wildlife watching. Included
Excluded
Payments Reservations require a non-refundable deposit of 20% per person at the time you receive a booking confirmation from Expeditions Online. A payment link will be sent to you and this may be paid by major credit card alternatively bank transfer. Bookings within 120 days of departure require full payment by bank transfer (balance payments may be made by credit card subject to a 2% surcharge). All prices shown are per person on a shared basis. We can quote and accept payments in USD, EUR, GBP, SEK and AUD. Cancellations All requests for cancellation must be received in writing to Expeditions Online. Since all payments are non- refundable, for cancellation received more than 120 days prior to departure = loss of deposit. After final payment there will be no refund whatsoever. We strongly recommend taking out travel insurance to protect you if you need to cancel. Insurance Emergency medical evacuation insurance is required for this expedition and must be obtained prior to departure. We strongly recommend that your insurance cover also has adequate trip cancellation insurance should you need to cancel your participation for any unforseen reasons. Sharing and Single Occupancy If you are travelling alone and wish to share, we can match you with someone of the same gender at the share rate. If a sole use cabin is desired, dedicated Single cabins are available. Children Children are admitted from the age of 12 years if accompanied by a fully responsible adult. There is no child discount available. Booking Terms Please read carefully the General Booking Conditions for Expeditions Online. This voyage is operated by PolarQuest and Antarctica21 and you additionally travel under their terms and conditions as the operator. Details will be forwarded to you at the time of booking.